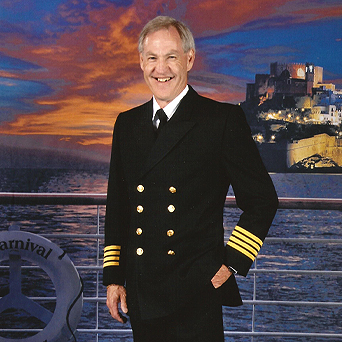 I’m one of the Marine Pilots for the beautiful port of Charlottetown. I was born and raised on PEI. From an early age, I had a calling to the sea. My father was a lobster fisherman in the Northumberland Strait in the same waters that the cruise ships transit during their approach to Charlottetown. My brother and I fished lobsters with him at a very young age.

After graduating High School I went to sea starting off as a seaman. Through the years I gathered sea time and attended Marine school and upgraded my certification until I obtained my Master Mariner’s certificate which qualified me to sail as Master on any ship any size anywhere in the world. My career took me all over the world on many different cargo vessels where I visited many exotic places. I retired from going to sea three years ago. I then became a Marine Pilot for the port of Charlottetown and the Confederation Bridge. My grandfather also happened to be a Marine Pilot for the port of Charlottetown in the World War II era.

Even though I sailed on ships for a living, I have taken many cruises for vacation on many of the cruise lines that call on PEI. I have been to many wonderful places worldwide both professionally and as a tourist, but I still feel PEI is still the best place in the world to live. If you have a chance to explore this place, which I consider paradise, I think you would agree.

One of the comments I get from many of the Cruise ship captains when I arrive on the bridge is that they consider the approach to Charlottetown in the early morning as one of the most beautiful sights they get to experience. If you have an opportunity to be up and about when your ship is arriving in Charlottetown, I guarantee it will be worth your while to see the rising sun shining on the red island cliffs at the entrance to the harbor along with a panoramic view of the rolling green fields along with the majestic Blockhouse marking the harbor entrance.

PEI has some of the finest beaches in the world and boosts the warmest waters north of the Carolinas. The north side of the island is home to the famous Cavendish Beach with its white sand, however, there are many white sandy beaches all along the north side of PEI. Cavendish is also home to Anne of Green Gables. The south side of the island is more about the red cliffs and red sandy beaches. PEI is home to over 20 championship golf courses and is a golf destination for many golfers.

The shellfish in Atlantic Canada and PEI in specific are second to none. If you have the opportunity to sample the lobster, mussels, oysters or clams you will not be disappointed.

I hope you will have the experience to cruise the East Coast of Canada and have Charlottetown as a port of call. If I happen to be the pilot on your vessel please say hello.

Enjoy a brief visit to PEI by watching this video vignette.